The EU is considering action to defend people's 'right to repair' electronic goods despite industry reluctance.

The European Commission launched a public consultation to assess the popularity of laws that would make certain products, including laptops and washing machines, easier to repair.

The move comes as consumer and environmental groups in the US have accused big tech companies of shortening the useful lifespan of electronic products in order to increase sales.

Market experts and campaigners argue that big tech companies are making it difficult or expensive for consumers and independent repairers to fix their products. This may involve making key components such as batteries, motors and displays difficult to replace and repair, or issuing software upgrades that may not be compatible with older models.

In many cases, consumers are forced to either send their goods back to the original manufacturer - something that can be more costly and take more time - or buy new ones. 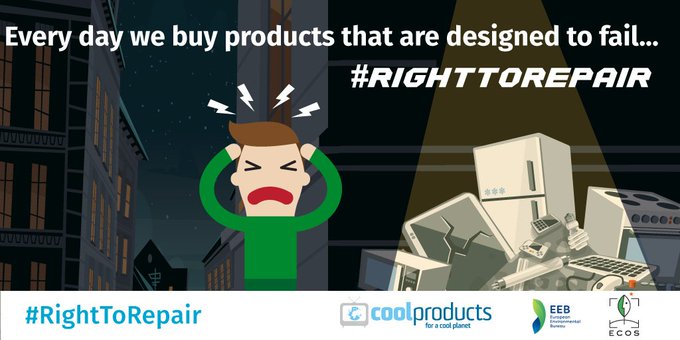 77% of EU citizens would rather fix their goods than buy new ones. Yet big tech wants to make repair difficult and more expensive. Help us fight back, join our call: https://www.coolproducts.eu/news/reclaim-your-righttorepair-1 ... #RightToRepair #euEcodesign

"This is an affront to the consumer's 'right to repair' and a hindrance to local repair shops, which translates into a waste of people's money and electronics that could be fixed instead of being thrown away," said Carsten Wachholz, a product policy officer at the European Environmental Bureau.

77% of EU citizens would prefer to repair goods, rather than buy new ones, a survey found last year.

But despite the public support, there are currently no laws requiring manufacturers to make products that last longer and are easy to repair.

Digital Europe, a lobby group whose members include tech giants Apple and Samsung, has been skeptical about the introduction of new EU rules, according to several NGOs including iFixit, which has long advocated for the right to repair in the US.

The industry group received criticism last year following the publication of a report in which it boasted that 28,000 tons of computer waste was shipped for repair and reuse in Europe. Green NGOs welcomed the efforts, but pointed out that these numbers are quite insignificant when compared to the number of products placed on the market and the increasing amount of e-waste.

With 44.7 million metric tons generated in 2016, e-waste is the fastest growing waste stream, accounting for 70% of the toxic waste in US landfills.

The NGOs said that "[...] the mere exposure of some good examples is not sufficient proof that the industry is on the right track," and added that EU laws to boost repair and make electronic products last longer are badly needed. The EU Ecodesign Directive, which is one of the most successful pieces of legislation on product design, would be the ideal policy framework for such laws, the groups said.

Wachholz stressed that similar laws exist in other sectors, where a different approach would be hard to conceive. Car makers already make spare parts and information available to independent mechanics whilst also offering certified repair services. Consumers can choose where to, for example, replace the tires of their cars.

Responding to calls made previously by the European Parliament and campaigners, the European Commission is now considering such laws as part of the EU Ecodesign Directive.

"This consultation is an opportunity to start getting things right. We can't trust companies to come up with voluntary solutions to improve repair when we know it's more profitable for them to make products that can't be fixed.

"Instead, we want to create a more favourable market environment for smart and local repair solutions from which consumers can truly benefit."

"When fixing items is actively discouraged by manufacturers, repair becomes a political act."