September 23, 2004 At just after 17.48 p.m. yesterday, we were sitting around the table at home in Barcelona picking at cheese when we felt a slight tremor. Slight though it was, it was unmistakable. The earthquake measured 4.1 on the Richter Scale and had its epicentre some 200km away in Queralps in the Catalan Pyrenees. In the village there was some minor damage and frayed nerves. Slight tremors are a common occurrence in the Pyrenees. More than 200 are recorded in Catalonia every year, but there's only one as strong as this one every five years or so.

The Iberian Peninsula is only at moderate risk from earthquakes, although every two hundred odd years one as big as six on the Richter Scale will inevitably occur. Iberia, once a plate of its own, is squashed between Africa and Eurasia, and is now fused to and part of the latter. That old saying that Africa begins at the Pyrenees is geologically wrong as well as being xenophobic horseshit, but in a very real tectonic sense Europe did once begin at the nascent Pyrenees. Although major friction is, for the time being, a thing of the past, ever so slowly and ever so powerfully the African and Eurasian plates still push up against each other, and this most commonly manifests itself in the Pyrenees, themselves forged, folded and formed by the ancient clash of the two plates; and in the south-west of the Peninsula, which lies closest to the fault line. That said, Iberia is in no way as active as Southern Italy, Greece or Turkey, where the full weight of Africa is in the process of shearing under Eurasia. 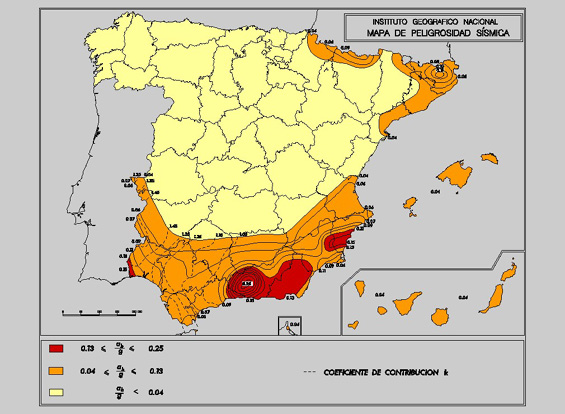 including this interesting aside:

It is interesting to note that just before Barcelona was shaken by the September 21 2004 earthquake, a 4.7 earthquake on the adjoining Eurasian plate led to buildings in Kaliningrad on the Russian border with Poland being evacuated. Geologists say that in this case, the tremors were caused by the rising of the Scandinavian plateau, still recovering from the heavy ice sheet that covered the region in the last Ice Age. The two earth tremors may be connected since movements in one plate create new stresses elsewhere. Should Barcelona's seismic risk be adjusted in the light of today's melting ice caps?